The Devestating Effect of Trade Deficits

Heh, not really. Here are some excellent graphs from Mark Perry, and as they say, a picture is worth an hour long lecture from a poli sci prof.  (Click on images to go to Perry’ posts.)

First, here’s some good evidence demonstrating the theoretical claim that a trade deficit is exactly equal to a capital account surplus.  Of course if people really want to stop foreign investment in the U.S. (and some do), then there’s really no hope of persuading them through either evidence or logic (or a combination of the two).

Then there’s the evidence that U.S. exports have been on a pretty strong upward trend since at least 2000, except during recessions, not in terminal decline as some have argued.  (And by way, look at this recent post of P.K.’s, in which he looks at manufacturing ;balance as a proportion of GDP as a way of showing decline in U.S. manufacturing during through the mid-90s.  What the hell?  Krugman famously bashed trade-balance arguments and the chimera of “competitiveness.”  “Sure, we’re producing more, but they’re producing more more is not a sound argument.) 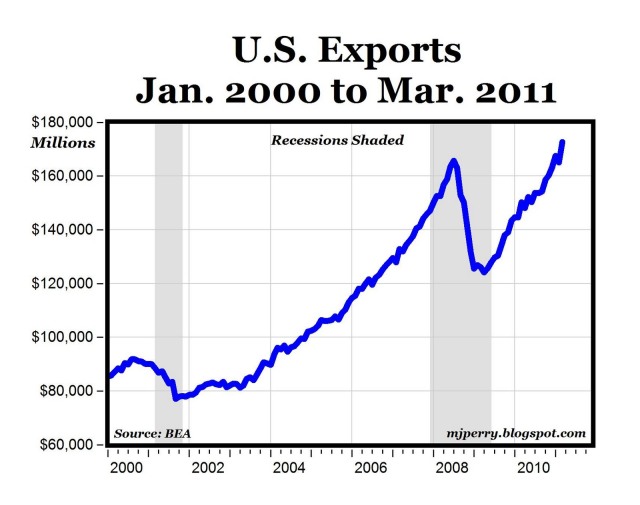 Finally, Perry has a graph demonstrating manufacturing productivity increase in the U.S.  Can you spot the evidence of “terminal decline” in the mid ’90s?  Me neither.

J@m3z Aitch is a two-bit college professor who'd rather be canoeing.
View all posts by J@m3z Aitch →
This entry was posted in Economical Musings. Bookmark the permalink.

8 Responses to The Devestating Effect of Trade Deficits