Maryland’s Flying Dog Brewery has a bone to pick with the Michigan Liquor Control Commission. The brewery gives all of its varieties dog-related names, but the MLCC is drawing the line at Raging Bitch brew on the grounds that the label is “detrimental to the public health, safety and welfare.” The beer has become the brewery’s number one seller, but is banned in Michigan. (Apparently other states lack concern for public health, safety, and welfare.) Flying Dog CEO said the case isn’t just about accurate labeling, but about “regulators gradually morphing into self-appointed thought police.” Sounds about right to me.

Here’s the label. I don’t care much for it myself, but of course that’s irrelevant. Flying Dog has filed suit against the MLCC in federal court. I don’t know enough about interpretation of the 21st Amendment’s provision allowing state regulation of alcohol to begin to hazard a guess on how this case will go, but Flying Dog is arguing that this action is outside the scope of those powers and constitutes a violation of their First Amendment rights to free speech. It’s certainly not a truth-in-labeling issue, which would be more clearly justifiable. 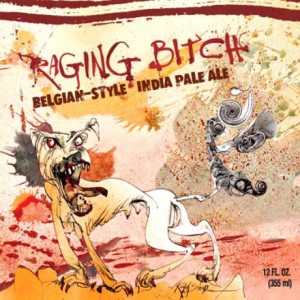 J@m3z Aitch is a two-bit college professor who'd rather be canoeing.
View all posts by J@m3z Aitch →
This entry was posted in Laws-Damned Laws-and Statists, The Nanny State. Bookmark the permalink.