My brother baldly accused me of liberaltarianism recently, which led me to do something I’ve long thought about doing–taking multiple on-line ideological placement quizzes, just to see where they place me. The results may say more about the surveys than about me. 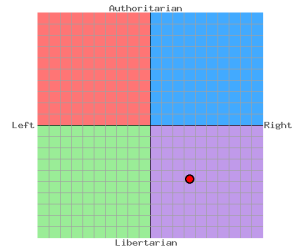 The Political Compass test has a reasonably good set of questions, although for a few I do not see the clear relation to a particular ideology (e.g., “Some people are naturally unlucky”–is it liberals, conservatives, authoritarians or libertarians who think that?). The results of this quiz rebut my brother’s claim, showing me clearly within the libertarian-right camp. Intuitively that feels too far right to me, and I’m not sure what causes it, given that I expressed support for homosexuality and opposed inculcating religious values in school. I guess it’s because I don’t hate multinationals and I think some criminals can’t be rehabilitated.

The Nolan Chart survey puts me in the centrist camp, which is probably pretty accurate (at least given how large their centrist category is), but along what would be the libertarian/conservative border if the chart was in quadrants. Again, contra my brother, I’m shown as pretty far from liberal; in fact even more conservative than the Political Compass suggests. But the Nolan Chart questions are a godawful mess, lumping different issues together and not allowing the respondent to distinguish positions clearly. For example trade and money are linked together, but I’m pro-free trade and pro-Fed, which isn’t a response option. And lumping together corporate welfare with social safety nets for individuals? At least the survey allowed me an pro-safety-net/anti-corporate-welfare response, but I’d ding any of my students who wrote such a question.

The most famous of these bipolar (sorry, couldn’t resist) quizzes is the “World’s Smallest Political Quiz, so frequently promoted by libertarians. I’ve been curious about the validity of this quiz, with it’s mere 10 questions, 5 on the social dimension and 5 on the economic dimension (which, unfortunately, is explicitly announced, creating the potential for leading the respondents), and would like to compare it to a lengthier quiz among a sample of respondents to see if it tracks a more comprehensive survey well. It certainly doesn’t comport well with the Political Compass or Nolan Chart results, but suggests my brother might be right after all. Yet I don’t think I’m that far left. The way the World’s Smallest Quiz works I’m pulled that far left because I’m so strongly civil libertarian, and I think that’s somewhat oversimplified. 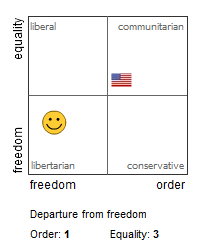 Finally there’s the IDEAlog10 Survey, a quiz inspired by the World’s Smallest Political Quiz and associated with a leading American Government Textbook (not one I have ever used, though). This quiz uses a set of questions drawn from leading public opinion polling firms. It’s a good, well-written set of questions, and independent of where it places me I am inclined to view it as the most reliable of these four alternatives. This one shows me solidly in the libertarian camp, rather closer to the liberal side than the conservative side but without actually falling into the liberal quadrant. It also reveals–I think quite accurately–that I’m more inclined to sacrifice pure freedom for the sake of equality than the sake of order. If that’s an accurate definition of liberaltarianism–and I have no idea if it is or isn’t–then perhaps I am one (although I’d still refuse to use the term purely on aesthetic grounds). At the least I think it accurately reflects something I’ve said many times, that if my choice was between a country run by liberals and one run by conservatives–a choice between equality and order–I would choose the liberal one with no hesitation (and then complain about it non-stop, of course).

I’m planning on having my students take the IDEAlog10 survey, to get them to thinking about where they line up ideologically. If you all are willing, I’d be pleased if you’d take a moment to take the quiz and report whether you think it seems to accurately identify your position or not (self-reporting your position is optional). 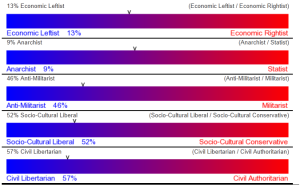 The Center for a Stateless Society Quiz is too long, at 106 questions. I begin to experience survey fatigue at around 40 questions. And while most of their questions are good, a few are really problematic. For example, “The emergence of a government, an entity with a monopoly of force, in a given territory is inevitable,” is a bit like asking whether rape and murder are inevitable– you can’t judge their ideology very well from a “yes” answer (although a “no” answer might provide some insight into their thoughts on human perfectibility). Other questions just don’t lead to a clear ideological distinction, saying yes to the question, “There are good reasons for me to support arrangements in accordance with which people who can’t afford decent health care can obtain it anyway,” could mean either that I support a national health care system or that my religious beliefs compel me to contribute to charitable health service organizations. What I do like about it is that instead of just placing you in space (although I have an inordinate fondness for spatial designations) it breaks down along different categories (which would be harder to do with significantly fewer questions). But those categories aren’t entirely clear–what does the anarchism category mean, when abstracted from those elements that, to me, are what constitutes the anarchy continuum? But it positions me as an economic leftist? I’m not sure what the basis for that is, and it would seem to make sense only in the sense that I’m not an economic nationalist (but many left-leaning people actually are economic nationalists). And I’m not sure why I have such a low civil-libertarian score, except that I think it’s ok for parents to keep their adolescents from having sex and that I think depriving people of liberty for having committed crimes is legitimate.

Myers-Briggs: did that one long ago. I’m an INTP, no ifs, ands, or buts about it. When reading the book Please Understand Me, I can’t, in fact, understand others. The other personality types seem bizarre, almost other-wordly, to me, whereas reading about the INTP type evokes a feeling of intimate recognition. That’s not to say I admire all aspects of the INTP type–a little more ability to follow through on ideas would be nice, and the ability to just play without feeling the need to turn all play into practice would decrease frustration levels (but how can anyone not care if they are getting better at what they do?). 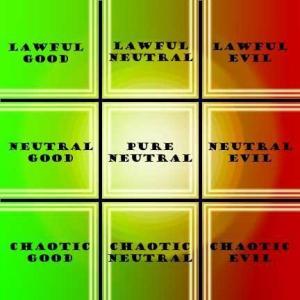 The Dungeons and Dragons alignment quiz defines me as “chaotic good.” Despite my minor doubts about the validity of the D&D characterizations, that actually seems rather a good characterization of me.

J@m3z Aitch is a two-bit college professor who'd rather be canoeing.
View all posts by J@m3z Aitch →
This entry was posted in Analyzing Libertarianism. Bookmark the permalink.

29 Responses to What’s My Ideology?