The “Immigrants Are Taking Our Jobs” Myth

Via Mark Perry, here’s a story about a California vineyard that tried to hire U.S. citizens to pick grapes. It didn’t turn out well, despite the unemployment rate in that county being over 9%.

Salisbury started with 40 applicants, but only seven actually finished the job.

The sixth-generation farmer immediately cut twenty applicants because they only wanted cash so they didn’t jeopardize their unemployment checks.

After an application process, their pool of scheduled interviewees was down to 22; of those, four didn’t appear, so they just took all 18 locals.

For about seven hours of work, pickers would get somewhere between ten to twelve dollars an hour; eighty dollars was guaranteed. Salisbury says workers were given breaks of fifteen minutes every two hours and half an hour for lunch.

That, however, was tricky too. Salisbury started out with 18 people. Four days later, he was down to just seven, and he doesn’t think any of them will be back next year.

I don’t often tell this story, but in graduate school I signed up with a temp company to help contribute to the household finances. One company I got assigned to was a local event management company, a job that involved little more than brute labor in setting up and tearing down equipment for different events. One of their regular gigs was turning the University of Oregon’s in-door football practice facility, the Moshofsky Center, into the country’s largest pre-game party tent. We had just a few hours to turn this… 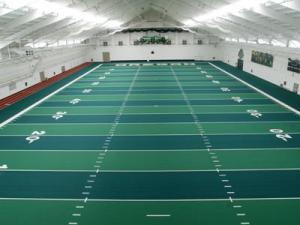 This involved setting up dozens of tables and many hundreds of chairs. That’s pretty menial work for a Ph.D. in the making, but after working two events for the company they began asking the temp place specifically for me. And the last time I worked for them, when I told them I was moving on and wouldn’t be able to help them out anymore, they were disappointed to see me go.

I’m about as proud of that as I am of anything else I accomplished in my life. Beyond that repeat temping, I’ve worked for four different employers who were happy to rehire me after some time away from them. And one of those other jobs was also menial labor (stocker in a building supply store) while I was deeply embedded in the intellectual world of grad school. I like what that all says about me, although I don’t often boast about it.

But here’s the kicker…I don’t actually have that great a work ethic. I’d consider myself middling at best. When I was a bike messenger one of the things I liked was that I could take a day off whenever I wanted. When I left that job due to a knee injury, I was pleased to get a 4 day, 24 hour a week job that didn’t require me to be at work until 2:00 p.m. I like my current job because I mostly get to set my own schedule, don’t have to go into campus every day, and don’t have to do any more work in the summer than I choose to do. I don’t want to reinforce the lazy academic stereotype–In the school year I normally have a 45-50 hour week, which sometimes rises above 60 hours, when I don’t go into campus I’m normally working from home, and in the summer I teach two online classes as well as trying to catch up on my academic reading. But I get to set the schedule, which makes all the difference, and the beauty of-line classes is how little time they take (after the very time-intensive initial creation of them). So, yeah, I’m a little lazy. But even I wouldn’t have any problem picking grapes if I was unemployed.

But some of my fellow citizens apparently find it beneath them; thank god for the illegals.

J@m3z Aitch is a two-bit college professor who'd rather be canoeing.
View all posts by J@m3z Aitch →
This entry was posted in Economical Musings. Bookmark the permalink.

12 Responses to The “Immigrants Are Taking Our Jobs” Myth