A Charitable Interpretation of Crazy Talk

Obama’s plan to designate more than 12 millions acres in the Arctic National Wildlife Refuge as wilderness, protecting it from drilling, has brought predictable responses from Alaska Republicans. I don’t doubt that many liberals find the responses to be a bit crazy, but I want to dig down into them a little bit, because I think there’s more there than immediately meets the eye.

The promises made to us at statehood, and since then, mean absolutely nothing to [this administration].

One might ask why those promises should mean anything. Alaska became a state in 1959, a decade before the environmental movement really got rolling. President Carter used the Antiquities Act in in 1978 to designate over 50 million acres of Alaskan land as National Monuments (his response to Alaska Senator Mike Gravel’s threat to filibuster legislation protecting these lands), and then signed the Alaska National Interest Lands Conservation Act (ANILCA) in 1980 after having lost his re-election bid. Simply put, the changed political landscape following the development of environmentalism as an important political value makes our view of Alaska different today than when it became a state, and that view has been at play for the majority of time Alaska’s been a state. So who cares about the promises made then?

But this demonstrates a key truth about government. Government assurances cannot be relied upon because the promises of one administration or session of Congress are in no way binding on future administrations or Congresses. In technical terms, government has a problem with credible commitment. Liberals might sneer at Alaska’s outrage, but the promises a current administration makes to their group could also be as summarily ignored, to their own outrage. A little empathy is in order, because next time it could be them.

It’s clear this administration does not care about us, and sees us as nothing but a territory.

[W]e will defeat their lawless attempt to designate ANWR as a wilderness, as well as their ultimate goal of making Alaska one big national park.”

I don’t think anyone actually has the goal of making the whole of Alaska a national park. We are, after all, talking about further protection of lands that are already designated for some degree of protection. But let’s focus on the “lawless attempt to designate ANWR as a wilderness” claim. On the face of it, it’s ridiculous–while presidents can unilaterally declare national monuments under the Antiquities Act, designating wilderness areas requires congressional action–and Obama is explicitly seeking congressional action–which by definition is lawful.

But let’s tie that “lawless” claim in with Murkowski’s claim that the administration sees Alaska as just a territory. To one segment of the American public, federal ownership public lands is a fully accepted idea, and has been since the 19th century. It’s such a long-established element of American politics that it seems unquestionable, and of course the federal government has authority over federal lands.

But there’s a great disparity among states in how much of their land is held by the federal government. The image below makes this clear (source). 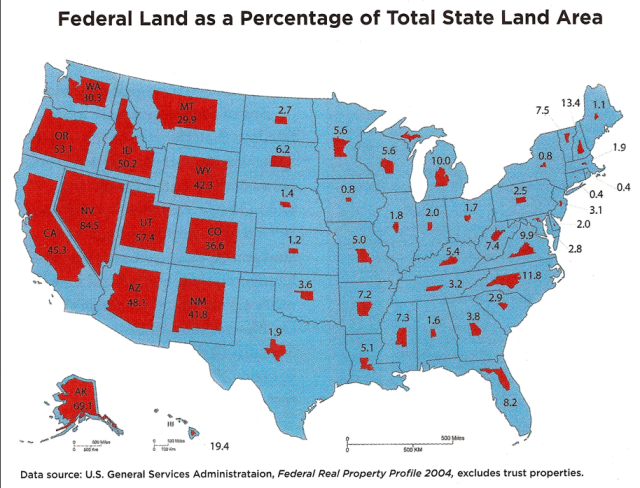 The disparity means that some states are very much closer to the status of territory than other states. While they have recognition in Congress, they exercise sovereignty over less than half of their own lands. This was the deal struck when these former territories were granted statehood, and it’s not crazy to argue that they weren’t really brought into statehood on truly equal terms with previous states

Hence the “lawlessness” is not so much in the present proposal, or in congressional action, but in the systemic structure that keep some states perpetually in semi-territorial status, untrusted with the lands within their borders, as other states are. In effect, Alaska, Nevada, Utah, Oregon and a few other states are have been colonized by the federal government. And consider how regionally imbalanced the federal control is. This potentially creates–arguably already has created–a large region of disaffected Americans.

Look Beyond the Crazy
A liberal can scoff, but a good number of the people in those states are angry. They see this structure as illegitimate, and that causes them to question the legitimacy of the federal government. And no matter how wacky you think someone’s perspective is, when sizable numbers of people begin questioning the legitimacy of the system that system can become politically unstable.

We’re not talking about demands to deny minority rights, or to establish theocracy, or even for autonomy, much less independence (yet, at least). We’re simply talking about a demand to actually have more influence in managing their own lands, like 38 other states have.

So liberals could easily discount Murkowski and Sullivan’s responses as crazy talk, as typical conservative nutjobbery. But I think they should look more deeply at what these complaints really signify.

15 Responses to A Charitable Interpretation of Crazy Talk