The #neverhillary/#nevertrump crowd is looking closely at Gary Johnson’s prospects for breaking through as a third party president. Everyone agrees they are slim, but many think it’s not impossible. My conclusion is that it’s not that implausible for Johnson to deny either Clinton or Trump an electoral majority and throw the election into the House, but once in the House his odds are vanishingly remote.

This is a first-pass analysis, so I may have missed some important points, and I’m open to constructive criticism. I also haven’t yet reviewed and revised, because it’s already taken more time than I can afford to spare to write it. If parts are not clearly written, please let me know, but please don’t bother to point out minor errors.

Initial Assumptions
If we begin by assuming each party wins the states they’ve won at least three of the past four years, we get Clinton:251, Trump:212 with 75 votes outstanding in the so-called swing states. That’s a huge Hillary advantage. Just winning Florida, which over the past four elections has gone for each party two times, would put her over the top. So would winning both Virginia and Ohio. This initial electoral map looks like this: 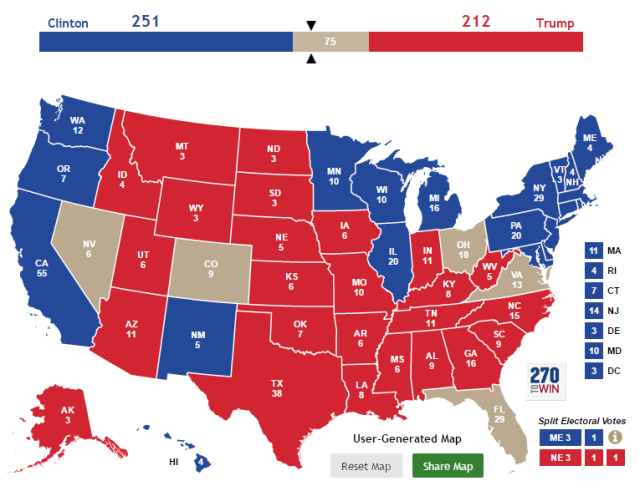 One of the revealed issues is just how few true swing states there are. Only nine states have gone to each party in at least one election of the past four. Four of those have only swung once, and several are unlikely to swing again. Indiana and North Carolina both went blue in 2008 only, as Obama anomalies. New Hampshire has split its vote D5-R4 since 1980, but has gone blue for the last three elections. New Mexico went red in 2004, possibly a wartime effect, but has returned to the blue column in the last two elections. So for this starting point I assume each of those will follow its normal pattern, but I will return to New Mexico later because it has a favorite son in the race.

5 states have gone D2-R2 over the last four elections, each of them going red-red-blue-blue: Colorado, Florida, Nevada, Ohio and Virginia. But three of them are probably tipping to blue through population growth rather than being true swing states. Colorado and Nevada both saw substantial inflow from blue California over the past decade, while Virginia’s population growth has been mostly in the D.C. metro area, which is very blue. If we assume they’re not true swing states, but states that have more or less permanently swung, we can put them in Hillary’s column.

That leaves us with Florida and Ohio. Florida is a bit of an unknown to me, so that’s a tossup, but I’m going to put it into the red column for analytical purposes. I know of no significant population change that would indicate a permanent shift to blue in Ohio, and as a state that is both industrial and bleeds into Appalachia, it seems Trump would have a strong chance there, so I’ll put that also in the red column.

These adjusted totals give us Clinton:279, Trump:259, which would be an extraordinarily close electoral vote count. Not as close as 2000, a little closer than 1916, and before that we have to go back to 1876 to get a closer electoral vote count: vote difference, with the election being determined in the House of Representatives. Here’s this adjusted electoral map.

Johnson’s Narrow Path, part 1: Blocking an Electoral College Majority
Now let’s make some adjustments and see if there is a plausible way that Johnson could win enough states to gain an electoral college majority. Note that plausible does not mean likely.

Begin with New Mexico. Johnson is the favorite son, who was elected twice as governor and remains popular, and the state is a bit eccentric, or at least the most welcoming state for eccentrics. If he were to win New Mexico he’d take five electoral votes from Clinton, bringing her down to 274, a smallish state away from losing.

Interestingly, there is more than one plausible path to that outcome. J. Wilson at A Libertarian Future gives a similar map but with Trump winning Nevada’s six electoral votes, knocking Hillary down to 286 and bringing Trump up only to 265, so that neither gets a majority. The same outcome would happen if Johnson managed to win Nevada. At this writing, Election Projection has Trump barely edging Clinton with mixed poll results. Johnson is only polling 5%. So J. Wilson’s scenario is more likely. But westerners have a libertarian streak, and Trump’s caricature of the big city slicker may not play well.

Another possibility is Utah, where Trump’s brash East Coast persona seems to play particularly poorly. Trump is trailing previous presidential candidates in Utah badly, with Clinton very close behind, and Johnson in a relative strong third, with support in the mid teens. If Hillary hangs onto Nevada, then Johnson has a path to throwing hte election into the House by picking up Utah in addition to his home state. But if he only manages to pull away enough Trump support to leave Hillary wining a close three-way contest, he’ll have to pick up Nevada plus another blue state, say Colorado — winning Arizona, for example, wouldn’t help — and the odds get longer.

So to recap, under some reasonable predictions about how states swing, the election could go into the House of Representatives in the following scenarios, ranked from most to least likely:

Johnson’s Narrow Path, part 2: Winning a Majority in the House
Amendment 12 to the U.S. Constitution provides that if no candidate wins a majority of the electoral college the House shall “immediately” select the president from the top three vote-getters — Clinton, Trump, and Johnson — with each state getting a single vote, meaning 26 votes wins.

Here’s where the analytical bugaboo appears — the new Congress would be the ones to cast those votes. On the first Monday following the first Wednesday in December the electors meet in their home states to cast their votes, which are then forwarded to Congress, on January 3 the new Congress will open, and on January 6 they will count the electoral votes and, if there is no majority, choose the President. And we don’t know what the state delegations will look like in that next Congress.

So again we make some assumptions. Most House members get re-elected, generally 85-95%, so we normally don’t see much change. If this were a year where a candidate wins big, their coattails might change that, but that seems unlikely, and if it happens Johnson loses anyway. Of course there are always a few retirements, but the vast majority of districts are safe for their party. Nate Silver estimates only 35 of the 435 House seats are not safe, only 8% of them. So a simplifying assumption that none of the House delegations will flip is not a certainty, but is a reasonable starting point. In other words, we can tentatively count the votes based on the current House delegations.

The Republicans have a huge advantage in the House, holding 34 delegations to the Democrats’ 13, with 3 split. (Note: it appears to me that the D.C. delegate, a Democrat, would get no vote as they have votes only on procedural matters and in committee, not on the floor of the House.) Hillary Clinton cannot win in the House, so as rational political actors, Democrats should look for their second-best outcome, and that is undoubtedly Gary Johnson. The Democratic loathing of Trump, and his harsh criticism of their candidate, make him an unacceptable choice. In analyzing these prospect, keep in mind the likely two-month long gap between when we know (albeit unofficially) the electoral vote count and when Congress would vote — that leaves a lot of time for strategizing and negotiations.

So begin with the three states with evenly split delegations, New Hampshire, New Jersey and Maine. None are hard right states, and in each the Democrats could simply vow to vote for Clinton and deprive the state of its vote unless the delegation casts its vote for Johnson. Maine and New Hampshire each have one Republican and one Democrat, so that one Republican would have to agree. New Jersey is six and six, so just one of six Republicans would have to change his vote. All would be looking at how their district voted, and the one most likely to agree to vote for Johnson would be the one in whose district Clinton did the best.

Those three states would shift the vote count from 34-13 to 34-16, still a huge Republican advantage. To win, Johnson would need to shift 10 majority-Republican state delegations to his column.

All else being equal, it’s easier to change the vote of a single legislator than to change the vote of multiple ones. And we can assume that in any given delegation the most easily persuaded person shifts their vote first, with successive switches within that delegation getting increasingly more difficult. So the first states to switch might be those where the Republicans have only a one member majority. There are six of these: Arizona, Colorado, Montana, Nebraska, North Dakota, and South Dakota.

If Johnson could get all of them, he would be at 22 state delegations with Trump still holding 28, so he would need to shift four more, even as they get increasingly difficult. I see only five contenders for those four spots, discussed here in a rough guess of descending likelihood.

So if Johnson could get all the states previously discussed, a very long shot, he would still need four of these last five states, including at least one of very unlikely Wisconsin and Michigan.

Denying either Hillary or Trump the electoral majority is the easy part of the election scenario for Johnson. Winning enough state delegations in the House is the hard–probably impossibly hard–part. It’s not enough that, as J. Wilson notes, “dozens” of House GOP members have criticized Trump. Talk is cheap, but denying your party the presidency is hard, and for House members going against your constituency on a presidential vote is likely to be even harder (although going for Johnson would not be as dangerous as going for Clinton). And pointing out that both Johnson and Weld were Republican governors might be ineffective, because to a large portion of the GOP constituency they’re not real Republicans, and if they’d run under the R label they’d be RINOs. If Johnson and the Democrats try to scrape this out individual vote by individual vote, I doubt they can manage it.

But what if more Republicans than necessary in a handful of crucial delegations decide to go for Johnson, so that instead of him winning a particular state with a minimum winning coalition, he starts winning Republican-majority delegations overwhelmingly? There is safety in numbers, and in an unusual case like this there could very well be a tipping point, a point at which enough Republican Representatives have mutually agreed to support Johnson over Trump that others feel safe flocking over to join them.

That’s not inconceivable, given how nervous Trump makes many members of his own party. Ryan could lead from behind on this, and House members might be hearing talk of this sort from their state’s senators, state-wide elected officials, and state party officers. But this would be almost entirely an Republican process, not a strategy for Johnson and the Democrats. And that’s why it may be more likely. Nobody likes to be persuaded by outsiders, but finding out there’s lots of quiet agreement on the inside can sometimes be a powerful force drawing in all those who were uncertain.

Would I wager on that? No. How heavily would I wager against it? Pretty heavily. Would I risk a month’s salary on it? No.